I'm a Doctor, traveler, entrepreneur, lecturer and business consultant. My permanent address is Northern Ireland but I'm often somewhere else!
On the Myers Briggs Scale I'm clearly a INT   P/J

These are pieces of an overall description of INTJ/INTP that I resonate strongly with.

To outsiders, INTJs may appear to project an aura of "definiteness", of self-confidence. This self-confidence, sometimes mistaken for simple arrogance by the less decisive, is actually of a very specific rather than a general nature; its source lies in the specialized knowledge systems that most INTJs start building at an early age. When it comes to their own areas of expertise -- and INTJs can have several -- they will be able to tell you almost immediately whether or not they can help you, and if so, how. INTJs know what they know, and perhaps still more importantly, they know what they don't know.

INTJs are perfectionists, with a seemingly endless capacity for improving upon anything that takes their interest. What prevents them from becoming chronically bogged down in this pursuit of perfection is the pragmatism so characteristic of the type: INTJs apply (often ruthlessly) the criterion "Does it work?" to everything from their own research efforts to the prevailing social norms. This in turn produces an unusual independence of mind, freeing the INTJ from the constraints of authority, convention, or sentiment for its own sake. (1)

INTJs are known as the "Systems Builders" of the types, perhaps in part because they possess the unusual trait combination of imagination and reliability. Whatever system an INTJ happens to be working on is for them the equivalent of a moral cause to an INFJ; both perfectionism and disregard for authority may come into play, as INTJs can be unsparing of both themselves and the others on the project. Anyone considered to be "slacking," including superiors, will lose their respect -- and will generally be made aware of this; INTJs have also been known to take it upon themselves to implement critical decisions without consulting their supervisors or co-workers. On the other hand, they do tend to be scrupulous and even-handed about recognizing the individual contributions that have gone into a project, and have a gift for seizing opportunities which others might not even notice.

In the broadest terms, what INTJs "do" tends to be what they "know". Typical INTJ career choices are in the sciences and engineering, but they can be found wherever a combination of intellect and incisiveness are required (e.g., law, some areas of academia). INTJs can rise to management positions when they are willing to invest time in marketing their abilities as well as enhancing them, and (whether for the sake of ambition or the desire for privacy) many also find it useful to learn to simulate some degree of surface conformism in order to mask their inherent unconventionality.

Personal relationships, particularly romantic ones, can be the INTJ's Achilles heel. While they are capable of caring deeply for others (usually a select few), and are willing to spend a great deal of time and effort on a relationship, the knowledge and self-confidence that make them so successful in other areas can suddenly abandon or mislead them in interpersonal situations. (2)

This happens in part because many INTJs do not readily grasp the social rituals; for instance, they tend to have little patience and less understanding of such things as small talk and flirtation (which most types consider half the fun of a relationship). To complicate matters, INTJs are usually extremely private people, and can often be naturally impassive as well, which makes them easy to misread and misunderstand. Perhaps the most fundamental problem, however, is that INTJs really want people to make sense. :-) This sometimes results in a peculiar naivete', paralleling that of many Fs -- only instead of expecting inexhaustible affection and empathy from a romantic relationship, the INTJ will expect inexhaustible reasonability and directness.

Probably the strongest INTJ assets in the interpersonal area are their intuitive abilities and their willingness to "work at" a relationship. Although as Ts they do not always have the kind of natural empathy that many Fs do, the Intuitive function can often act as a good substitute by synthesizing the probable meanings behind such things as tone of voice, turn of phrase, and facial expression. This ability can then be honed and directed by consistent, repeated efforts to understand and support those they care about, and those relationships which ultimately do become established with an INTJ tend to be characterized by their robustness, stability, and good communications.

Precise about their descriptions, INTPs will often correct others (or be sorely tempted to) if the shade of meaning is a bit off. While annoying to the less concise, this fine discrimination ability gives INTPs so inclined a natural advantage as, for example, grammarians and linguists.

INTPs are relatively easy-going and amenable to almost anything until their principles are violated, about which they may become outspoken and inflexible. They prefer to return, however, to a reserved albeit benign ambiance, not wishing to make spectacles of themselves.

A major concern for INTPs is the haunting sense of impending failure. They spend considerable time second-guessing themselves. The open-endedness (from Perceiving) conjoined with the need for competence (NT) is expressed in a sense that one's conclusion may well be met by an equally plausible alternative solution, and that, after all, one may very well have overlooked some critical bit of data. An INTP arguing a point may very well be trying to convince himself as much as his opposition. In this way INTPs are markedly different from INTJs, who are much more confident in their competence and willing to act on their convictions.
Mathematics is a system where many INTPs love to play, similarly languages, computer systems--potentially any complex system. INTPs thrive on systems. Understanding, exploring, mastering, and manipulating systems can overtake the INTP's conscious thought. This fascination for logical wholes and their inner workings is often expressed in a detachment from the environment, a concentration where time is forgotten and extraneous stimuli are held at bay. Accomplishing a task or goal with this knowledge is secondary.

INTPs and Logic -- One of the tipoffs that a person is an INTP is her obsession with logical correctness. Errors are not often due to poor logic -- apparent faux pas in reasoning are usually a result of overlooking details or of incorrect context.
Games NTs seem to especially enjoy include Risk, Bridge, Stratego, Chess, Go, and word games of all sorts. (I have an ENTP friend that loves Boggle and its variations. We've been known to sit in public places and pick a word off a menu or mayonnaise jar to see who can make the most words from its letters on a napkin in two minutes.) The INTP mailing list has enjoyed a round of Metaphore, virtual volleyball, and a few 'finish the series' brain teasers.


(1) Something to point out here is that I often feel a disconnect between my thinking and specific emotions when I'm very focused on a task it can feel like I'm completely absorbed and that I still have an emotional level but it is superceded by the logical thinking part of me.
(2)  Friendships and subsequently Romantic Relationships are both very much focused and learned traits for me. Each independently took years of focused effort. I still work on maintaining long term harmonious relationships both in friendships and in my romantic life.) 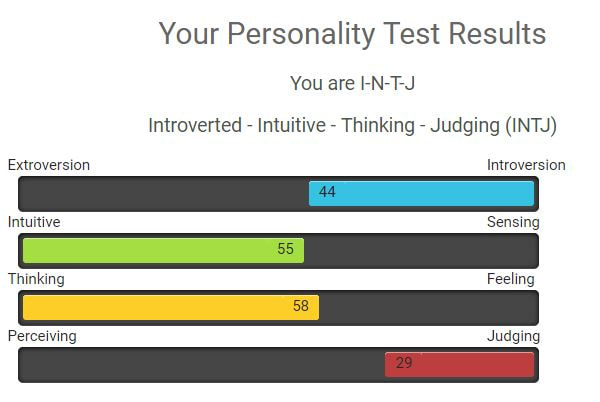 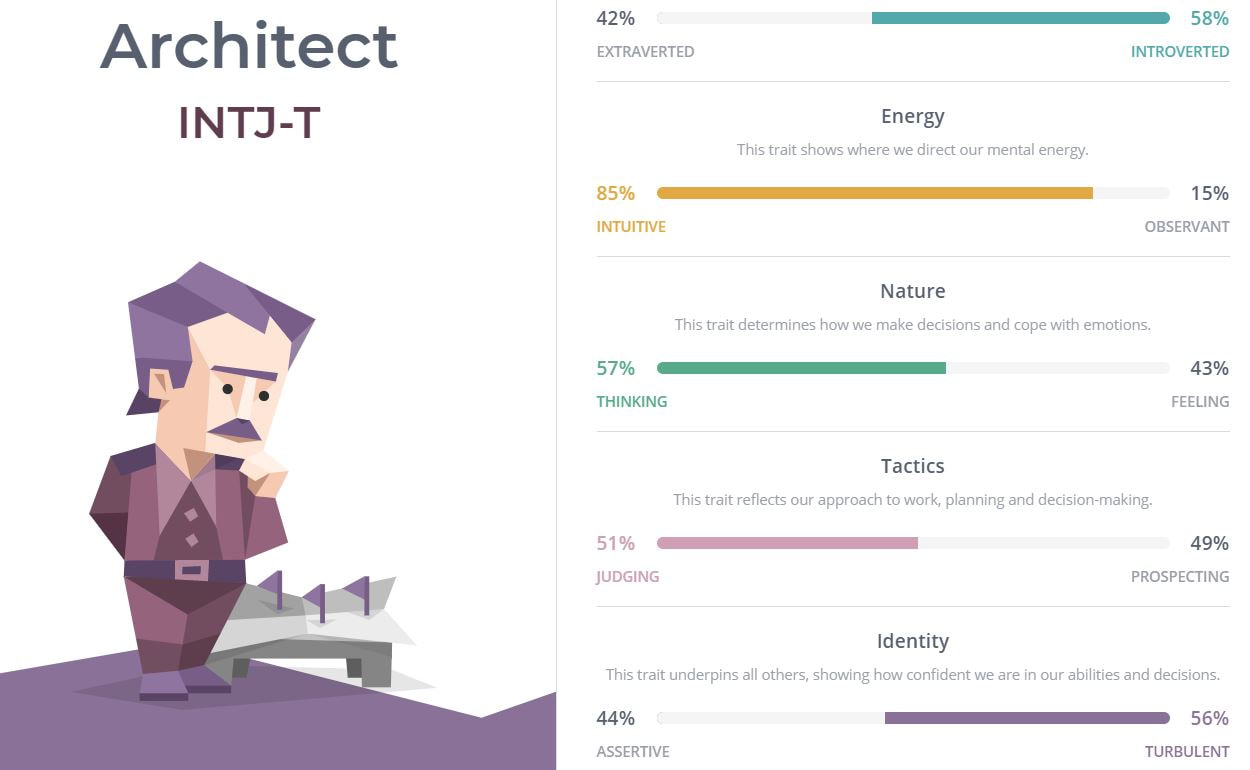 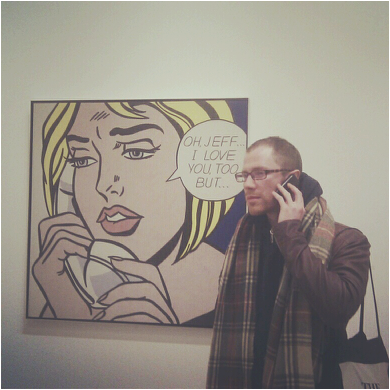